International convenience store chain Circle K needed a comprehensive training solution for its 15,000 European employees. One that could roll out across 9 territories, increase the average customer basket size, and reduce staff turnover.

With Attensi’s gamified simulation training, the company exceeded its KPIs on all of the above. The campaign’s success led to it being named Best HR Technology Strategy at the 2020 HR Excellence awards.

✅ 85% of staff said they felt the training made them better at their jobs.

As one of the world’s leading convenience and fuel retail businesses, Circle K is only too familiar with consistent good customer service. Across Europe, the company employs over 15,000 people in more that 1,500 stores, in 9 territories – the kind of logistics that present considerable challenges for staff training.

With different cultures, languages, and individual store managers running their own business to consider, making sure customer service remains courteous, swift, and consistent is no easy task. So, when Circle K launched an ambitious growth strategy centred around its staff, the European People Development team seized the opportunity to take training to the next level.

The Solution: ‘Train to Win’ with Attensi BEHAVIOUR

The team had previously used both video and traditional e-learning but decided that this new training needed to be mobile-first.

Additionally, to consider the campaign a success, the Circle K team set themselves a high bar with 3 key metrics. The training had to:

1️⃣ Make at least 70% of staff feel more confident and better at their daily jobs.

Attensi BEHAVIOUR provided the solution Circle K were looking for. Working closely with the designers and writers at Attensi, the team recreated one of Circle K’s stores as a 3D gamified simulation called ‘Train to Win’. 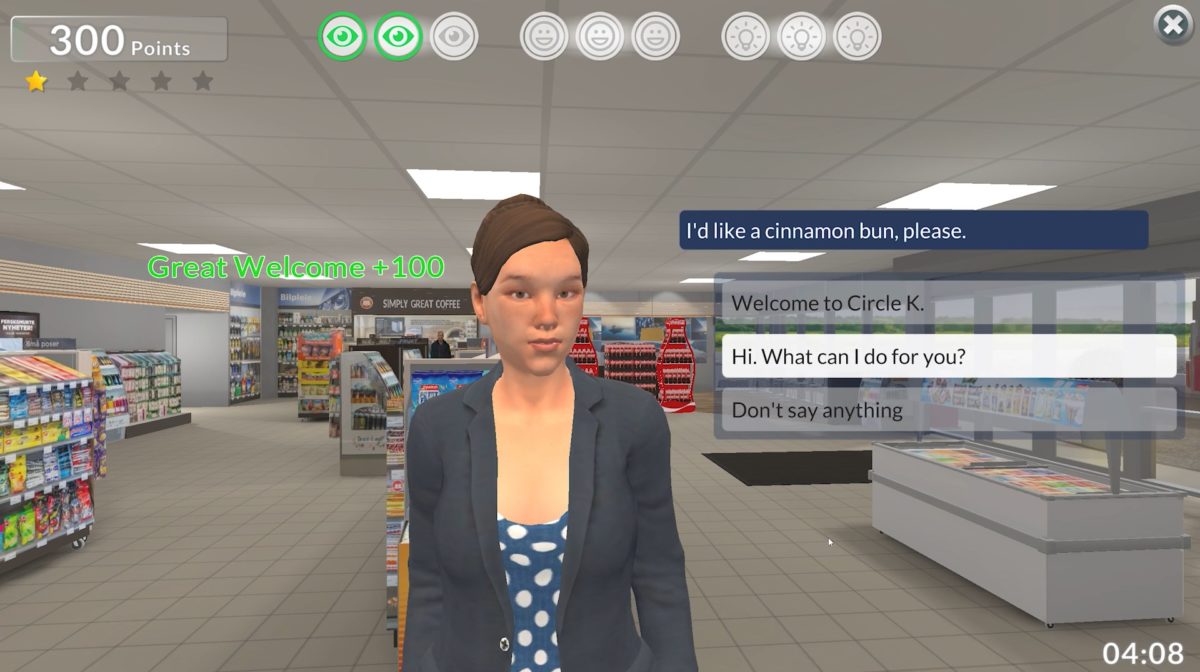 Playing through their mobile device or tablet, users are tasked with addressing the needs of virtual store customers. These are represented as 3D avatars with motion captured body language and facial expressions to convey their varying moods.

The immersive in-game scenarios offer multiple choice dialogues, all voiced by real actors. Correct responses are rewarded with points, and eventual progression to the next stage. Rather than punish wrong decisions, the simulation instead gives feedback and advice on what to try next time, creating a safe environment where failure and experimentation are encouraged.

The ‘Train to Win’ simulation has been adapted per territory, with specific products and procedures for each market. The result is a bespoke gamified simulation, tailor-made and relevant across all 9 European countries.

Despite their ambitious targets, the results of the campaign exceeded all expectations. Amongst all stores who used the training:

✅ 85% of staff reported that they felt the training made them better at their jobs.

✅ By contrast, the rate of staff turnover was reduced considerably.

But surpassing these KPIs wasn’t the only cause for celebration at Circle K Europe. In January 2020, the judging panel of the HR Excellence Awards handed the ‘Train to Win’ team the award for Best HR Technology Strategy.

It has helped us increase merchandise sales and basket size while reducing employee turnover. Plus, 97% of store managers like this type of training and say it makes onboarding easier and ensures more consistent behaviour.

Looking for staff training results that will make your CEO sit up and take notice? Let’s start a conversation: